This is a very common genetic condition originating from the Vikings of old northern Europe. It is a disease of the tissue just under the skin and causes pits and lumps in the palms and fingers. In the advanced stages it can curl the finger downwards. Splinting and non –operative management will not cure or slow this. However it is important not to operate to early as this can make things worse. The time to intervene is when it becomes a functional problem, such as when you poke yourself in the eye when washing your face, or cannot put your hand in your pocket. Treatment varies depending on severity and on the patients wishes. From needle rupture, enzyme injection to complete excision. Recurrence is higher, with the first two treatments, but recovery is much quicker.

There are two associated conditions where you can get the same thickening of the fascia in the soles of the feet (Ledderhose disease) and in the penis (Peyronie disease). 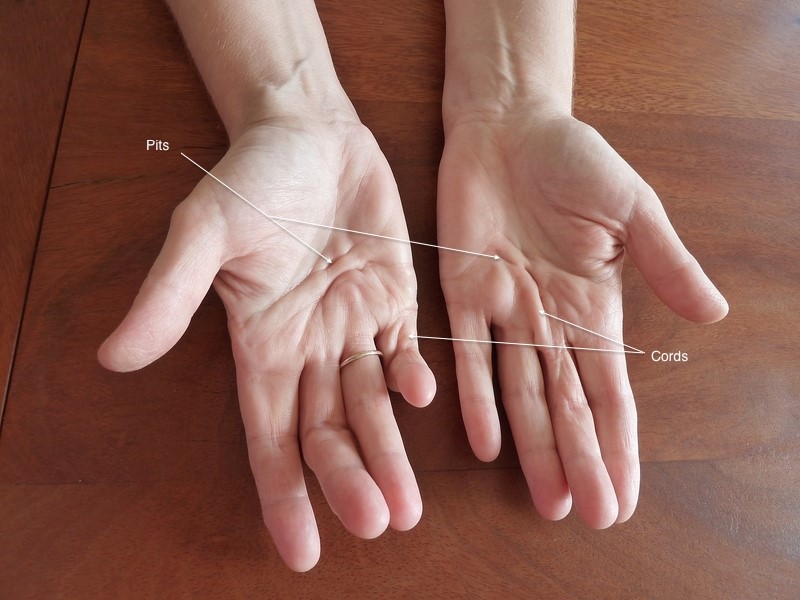 This is a very common condition that presents with pain in the palm near the bases of the fingers (over A1 pulley at MCPJ). There is hypertrophy of the Al pulley which causes constriction of the entry to the flexor sheath. The tendon of FDS splits here and can get caught under the pulley. The finger clicks as it extends or sometimes cannot extend without help from the other fingers. Occasionally there may be a nodule in the tendon e.g. a ganglion, but this is much more rare than textbooks would quote. The treatment is non-operative to start, a steroid injection and a nocturnal splint and will cure the condition in 60-70% of cases. If this fails a second injection should be given. This has an additional 60-70% chance of success. If this fails, then further injections will not help and surgical release is performed. Patients who have multiple trigger fingers or diabetes are less likely to respond to non-surgical treatment. 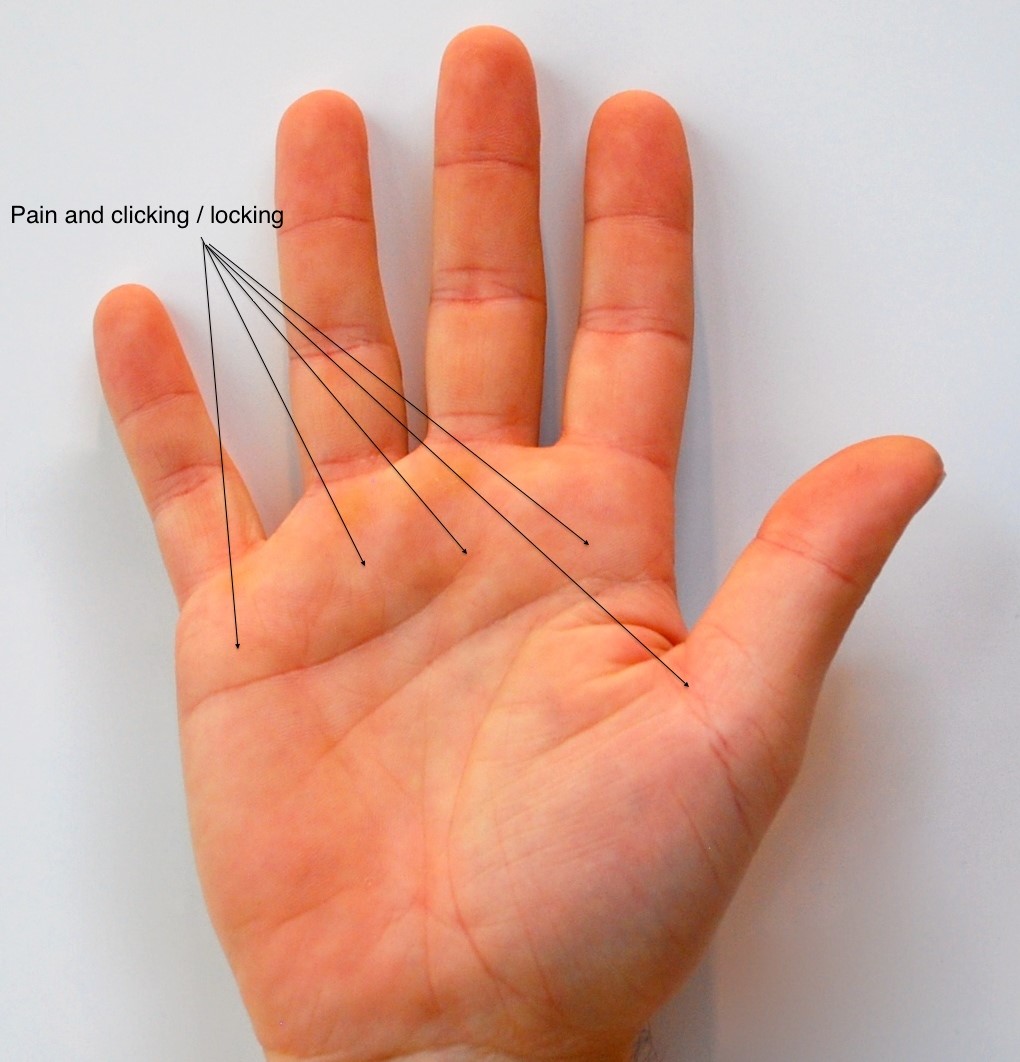 This is swelling of the lining (tenosynovitis) around 2 of the tendons to the thumb (EPB and APL in the first dorsal compartment). They travel through a tight tunnel at the wrist, which can cause friction and pain, especially with enclosing the thumb in the palm when making a fist and bending the wrist towards the little finger (ulnar deviation). Treatment is splinting and / or injection. Only rarely does this need surgical release. This commonly occurs in new mothers when picking up their children a lot. 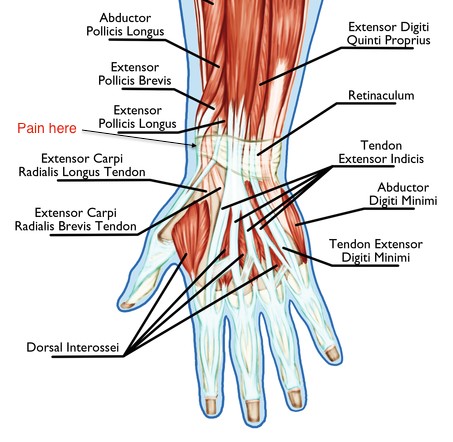 Another tenosynovitis like De Quervain’s but much less common. It is caused by friction as the first compartment tendons (EPB and APL) cross over the second compartment tendons (ECRL and ECRB). This most commonly occurs with repetitive motions such as weight lifters. This is normally treated with a split and modification of activities. It rarely needs surgery.

The ECU (extensor carpi ulnaris), is a muscle that extends the wrist (moves backwards). Its tendon along with all the other tendons that extend the fingers, thumb and wrist pass under the extensor retinaculum, which is a thick fascial band that keeps the tendons in place. The ECU however can become lose and dislocate around the ulna head, which can be symptomatic. Anti-inflammatories and a brace can often minimize the symptoms. If this fails the tendon can be stabilized using a small slip of the extensor retinaculum 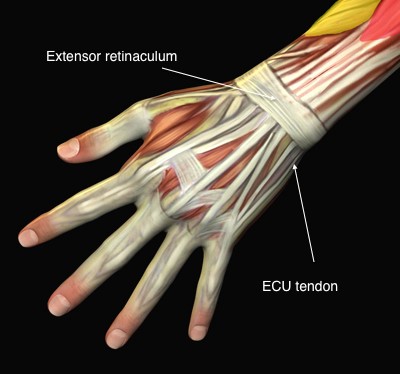 This is more common than previously recognized. It presents as a vague pain in the wrist and weakness. Often found in young females who are ligamentously lax (double jointed). This is a dynamic condition, that can only be appreciated on physical exam. In the normal examination of the wrist the midcarpal joint can be subluxed (partially dislocated) in most people, but it should not be painful. Diagnosis is made when subluxing the joint recreates the presenting pain. Treatment starts with non-operative management, splinting, steroids and anti-inflammatories. This condition is self-limiting and will go away with time. However in the minority of patients a tightening (plication) of the wrist capsule will help.

There are many tendons all around the wrist, any of which can become tender and inflamed. Often patients can diagnose this, as the pain is along a palpable tendon. Depending on the condition, splinting, steroids, anti-inflammatories and activity modification will help. It is rare in most cases that surgery is required.

Pain on the outside of the elbow (tennis elbow) or inside of the elbow (golfers elbow) are common conditions. There is localized pain around the boney prominences around the elbow. This is actually a degeneration within the tendon just off the bone. Steroids , anti-inflammatories and braces will treat this in most situations. However surgical debridement can be performed in refractory cases. 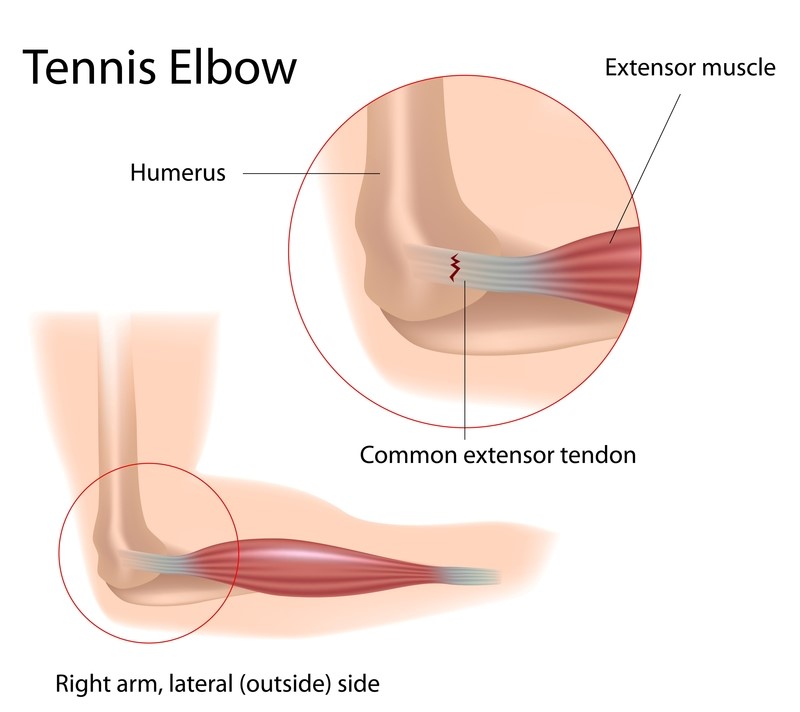 Ganglions are the most common ‘tumour / swelling’ in the hand. The are non cancerous and not dangerous. They are a fluid filled out-pouching of the joint, or tendon sheath. The size can fluctuate regularly and they can disappear all together by themselves occasionally. They commonly occur around the back of the wrist, underside of wrist, or the tips of the fingers, where they are called a mucous cyst. They can also occur along the tendons of the fingers. Classical treatment was hitting it with a large book (bible), however this had a high recurrence rate. Today if it does not bother you, then do nothing. If it is painful, restricts activities or is unsightly then they can be aspirated (sucked out with a needle) or removed. Aspirating has a high recurrence rate. Removal also has a risk of recurrence but it is much less likely. 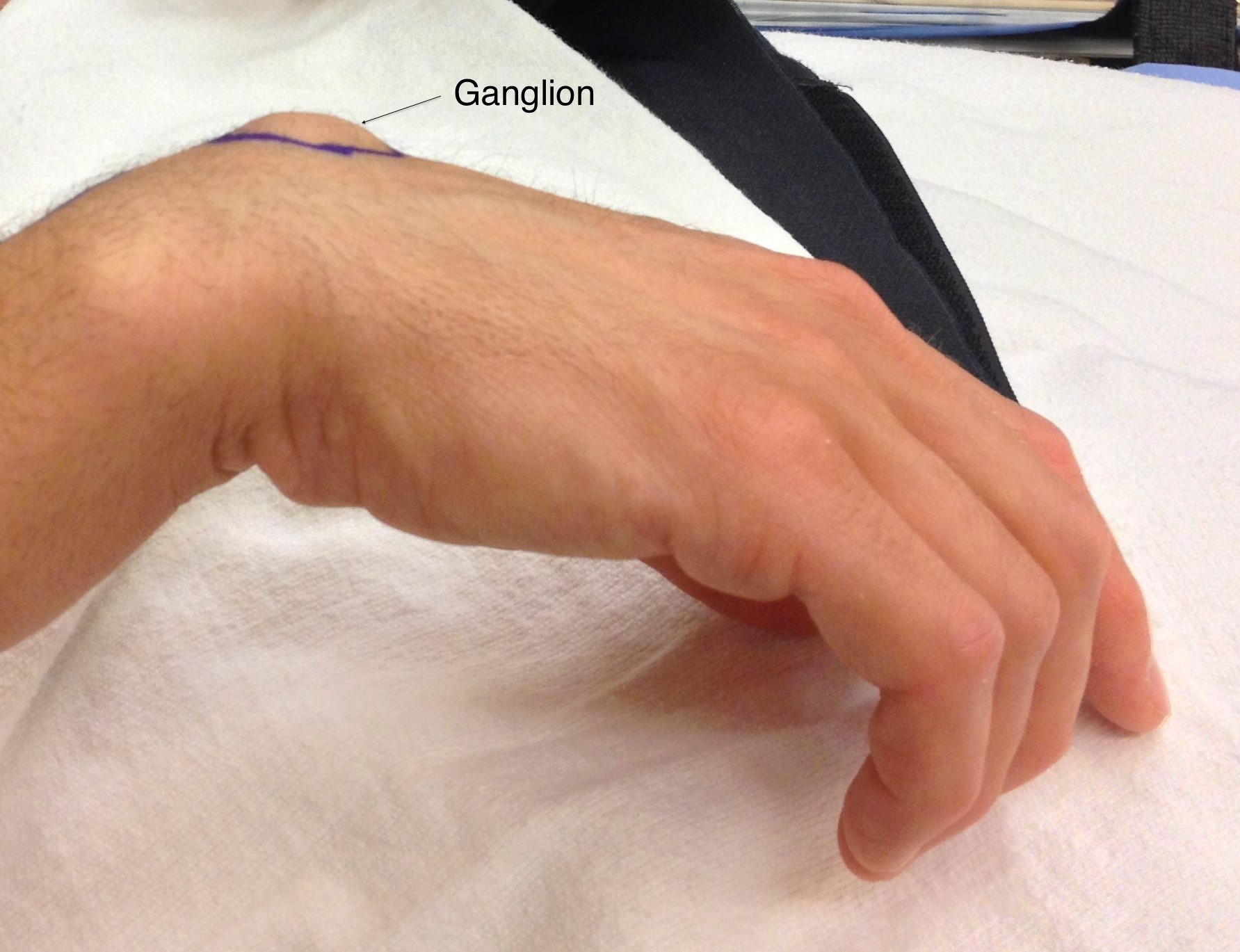